The global economy has come a long way since the depths of the pandemic recession in 2020. The Great Recovery of 2021 has so far been volatile and difficult to navigate. The remainder of the year could be at least as difficult with the added stress of potential Central Bank actions, which themselves are highly dependent on ever-changing data signals.

Although forecasting is particularly difficult at this moment, we maintain a set of baseline assumptions as follows. 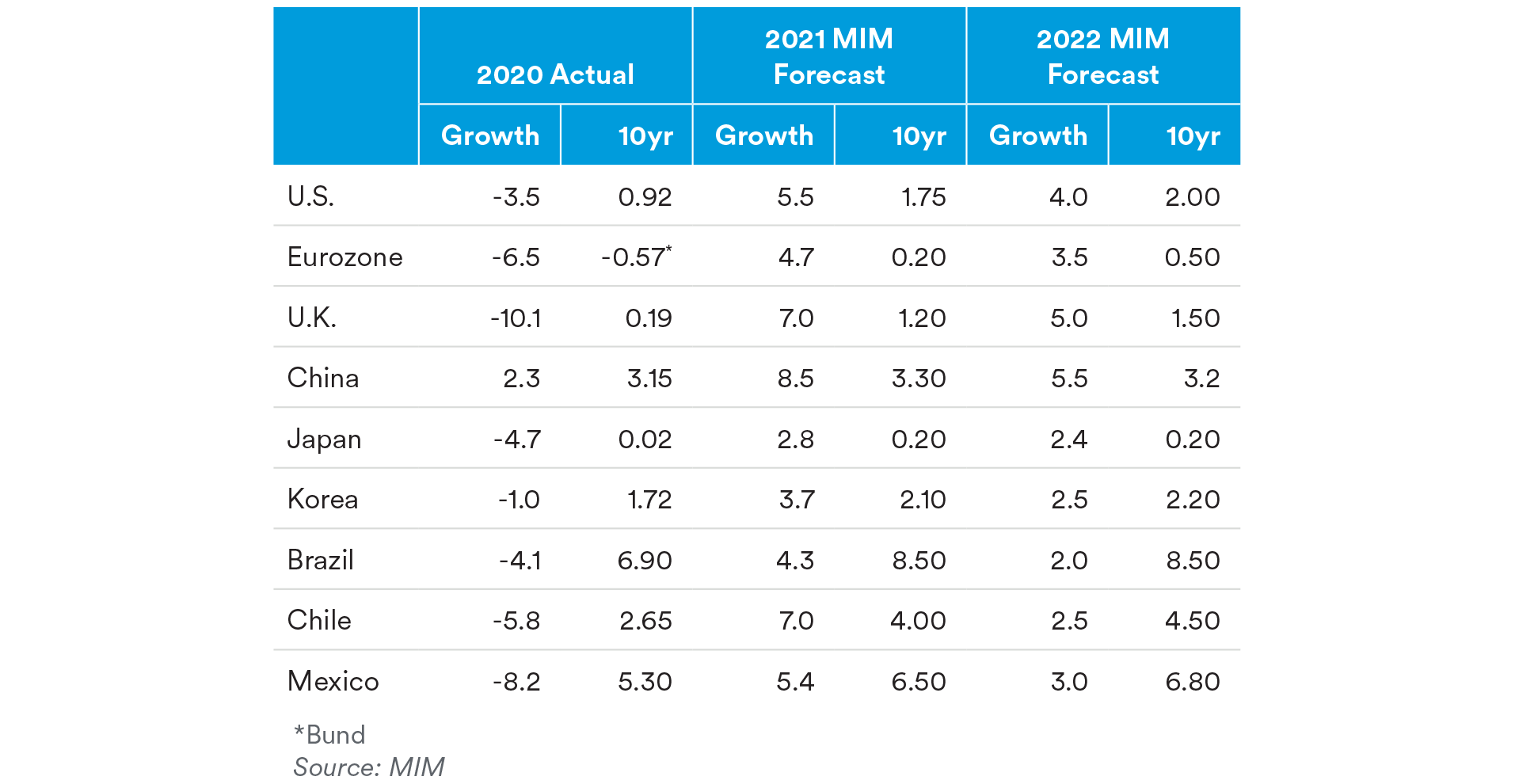 The next few sections address what we believe to be the greatest risks to our forecast. 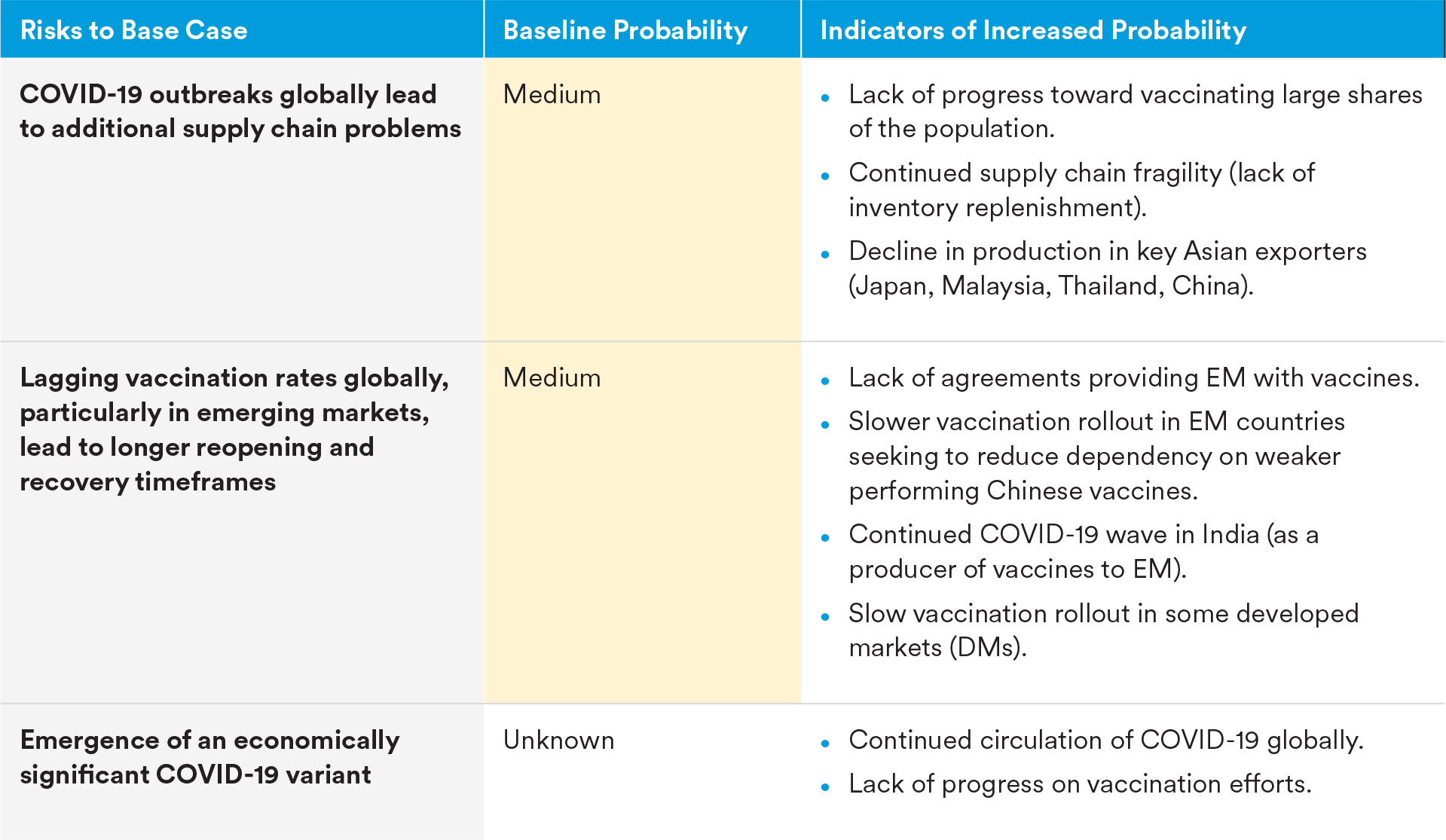 In most developed countries, as well as some emerging economies, the threat of further nationwide lockdowns being imposed is receding. Instead, risks appear to be centered around the potential for localized outbreaks and subsequent shutdowns in sectors or regions that have national or global ramifications, such as affecting downstream production or suppressing demand.

Much more difficult to quantify is the risk of a viral variant emerging that evades vaccines or threatens countries more substantially, such as by targeting children or by becoming more deadly.
The probability of a materially more dangerous viral variant emerging is unknown, although it appears that the more the virus circulates globally the greater the risk.

The progress on recovery and associated reflating of economies means that central bankers face the difficult task in policy normalization in the second half of the year.

While in the first half of the year central bank mandates were relatively clear (maintain easy monetary policy), the economic reopening means central bankers globally – including the U.S., the euro area, U.K. and Japan – need to face the need at some point to unwind both asset purchase programs and zero lower bound rates. More than that, they need to carefully navigate between growth and inflation. This is expected to be a complicated and uncertain process, as the usual indicators and benchmarks that central bankers rely on may not be as helpful as they are following a more conventional recession.

In the U.S. specifically, the risk is for the Federal Reserve to misjudge the navigation between high inflation and a tight labor market on one hand, and fundamental slack in the economy on the other. In particular, the labor market appears to be extremely tight, with far fewer people appearing to re-enter the labor force than expected. This has driven wage pressure up just as other prices have risen. The Fed will need to weigh the need to reduce inflation pressure with its own assessment of labor market slack.

For China, a key risk is of policy misstep, in that Beijing pushes its de-risking campaign too aggressively despite expected growth headwinds in the second half of the year. Part of the derisking program is to encourage more corporate defaults in a bid to extract moral hazard from the financial system and introduce more market discipline; if they are too aggressive on this front, Beijing risks triggering a credit crunch or disorderly contagion in the domestic financial markets.

In Europe, we expect the European Central Bank (ECB) to err on the side of caution and tolerate a period of above target inflation as the economy rebounds from the pandemic shock. A key unknown for the ECB at this point is the amount of slack or permanent damage that the economy will be operating with once government support programs – particularly those that supported the labor market – are withdrawn. A similar uncertainty faces the Bank of England (BoE). While both the ECB and BoE are forecasting that inflation will return to (or in the case of the ECB fall back below) their policy targets in 2022-23, the risk is that inflationary forces may prove more enduring than currently assumed, triggering a faster and sooner-than-expected tightening of policy.

As the economy exits from the COVID shock, the Bank of Japan (BoJ) is likely to “normalize” in a broader sense, winding down its purchases of JGBs and risk assets. However, proper tightening is a distant prospect: the BoJ will likely keep current rate settings unchanged at least through the remainder of Governor Kuroda’s term (ending April 2023) and likely beyond, underscoring the BoJ’s role as laggard among DM central banks.

Inflation is currently a global topic of concern. Inflation is expected to rise above target levels in 2021. However, none of the major developed economies expect to see extraordinary inflation levels persist through year end.

In the U.S. and Europe, the pace of inflation has been rising due to strong demand, higher commodity prices, strong base effects (due to abnormally low inflation in 2020) and stressed supply chains. These factors are expected to be transient, however, and resolve without leading to unanchored expectations (expectations that beget further expectations of high and rising levels of inflation). We believe the biggest threat to inflation in the U.S. is via the labor markets. U.S. labor force participation is about 3.5 million1 smaller than before the pandemic; if more people do not enter the labor force by the end of this year, the labor market tightness could endure for the duration of this cycle.

In Europe, inflation has been primarily imported, via oil and other commodity prices, as well as reflecting unflattering base effects from abnormally low inflation in 2020. Although Europe is expected to continue reopening in the second half of the year and is likely to experience a strong boom in consumer spending as households wind down some of their enforced higher savings levels, government stimulus has been more restrained than that seen in the U.S. and European economies are, in general, operating with more slack after the pandemic-induced slump than is evident across the Atlantic.

In China, slower growth momentum in the second half of 2021 amid a credit slowdown suggests some stabilization in global commodity prices ahead. As such, China’s producer inflation has probably peaked and headed lower by year-end. For Asia generally, inflation is expected to be a low risk for the remainder of the year.

The pandemic interrupted late-cycle economic activity in the U.S. We see some possibility that the post-pandemic economy merely resumes that cycle rather than representing an entirely new cycle. Late-cycle activity included compressed profits and a significant overhang of unproductive companies. If labor market tightness continues, and wages continue to rise, we could see resumption of profit margin compression. Profit margin compression could lead to weakening demand for workers. Relatedly, bankruptcies fell off sharply during the pandemic, but could resume once Federal Reserve support for asset purchases is withdrawn.

Supply/demand mismatches are currently showing themselves through labor market shortages and goods shortages, as well as through consumer demand skewed toward goods and away from services. These mismatches could take longer than expected to unwind. Alternative, new mismatches could form: for example inventory excesses, labor supply excesses, overreaction by manufacturers and services providers to temporary changes in consumer demand. This could extend inflation concerns, labor market uncertainty, and questions about the path of the Federal Reserve.

U.S.-China relations are likely to remain tense. Relations are likely to be less volatile than under the Trump administration, but underlying tensions will continue, and the multilateral approach may cause China to feel increasingly threatened and compelled to retaliate in some way. The most tangible risk is likely for China to make use of its newly introduced anti-foreign sanctions law. It provides a high degree of latitude on implementation and legal backing for China to retaliate against foreign sanctions by, for example, freezing assets of foreign corporations and instituting travel bans for their workers.

The U.S. is in the process of reviving trade and investment ties with Taiwan, potentially the prelude to a broader trade deal. This follows an announced shipment of vaccines to Taiwan by the US as well as more efforts to integrate Taiwan’s semiconductor industry with the U.S. military complex. This is a great source of aggravation for Beijing, which sees these moves as continued infringement on its sovereignty, which is likely to lead to a more aggressive posture on Taiwan.

Another source of noise is expected to be U.S. intelligence conclusions on the origins of COVID-19 and to what extent China would be implicated. Regardless of outcome, this is expected to be a public relations problem for China – at best it would highlights the regime’s lack of transparency.

This document has been prepared by MetLife Investment Management (“MIM”) solely for informational purposes and does not constitute a recommendation regarding any investments or the provision of any investment advice, or constitute or form part of any advertisement of, offer for sale or subscription of, solicitation or invitation of any offer or recommendation to purchase or subscribe for any securities or investment advisory services. The views expressed herein are solely those of MIM and do not necessarily reflect, nor are they necessarily consistent with, the views held by, or the forecasts utilized by, the entities within the MetLife enterprise that provide insurance products, annuities and employee benefit programs. The information and opinions presented or contained in this document are provided as the date it was written. It should be understood that subsequent developments may materially affect the information contained in this document, which none of MIM, its affiliates, advisors or representatives are under an obligation to update, revise or affirm. It is not MIM’s intention to provide, and you may not rely on this document as providing, a recommendation with respect to any particular investment strategy or investment. The information provided herein is neither tax nor legal advice. Investors should speak to their tax professional for specific information regarding their tax situation. Investment involves risk including possible loss of principal. Affiliates of MIM may perform services for, solicit business from, hold long or short positions in, or otherwise be interested in the investments (including derivatives) of any company mentioned herein. This document may contain forward-looking statements, as well as predictions, projections and forecasts of the economy or economic trends of the markets, which are not necessarily indicative of the future. Any or all forward-looking statements, as well as those included in any other material discussed at the presentation, may turn out to be wrong.