A Cutting History: 2023 in Context

During the FOMC Press Conference on September 21, U.S. Federal Reserve (Fed) Chair Powell pointed out that the housing price gains were not sustainable. He also suggested that the housing market may have to enter a correction or see a cooldown in housing prices to take the supply and demand back to equilibrium and to pull inflation back down to the Fed’s target level.1

In line with Chair Powell’s comment, we believe housing prices may see a correction, which is also indicated by our findings about cooling sales activity, lower affordability, relatively slower growth of rent and income, rising interest rates, and tightening lending conditions. However, we don’t expect the current housing market slowdown to mirror what happened during the housing market crash in 2008.

Current Price Gains May Not be Sustained

Sales and Affordability are Down

Home sales activity has been cooling, with home sales seeing negative, year-over-year (yoy) growth estimates since August 2021, and total home sales falling by 21% yoy in September—the largest contraction since the Global Financial Crisis (GFC) (when total home sales dropped by 32% yoy in 2007, Figure 1.) The Housing Affordability Index, which tracks the affordability of housing based on median home prices, median income, and mortgage rates, fell to 102.8 in June, the lowest since June 2006 (right before the GFC). This measure shows that fewer families will be able to afford the median-priced house based on their current incomes and mortgage rates. With continued rate hikes, we expect U.S. for-sale housing to become even less affordable.

Home Prices are Under Pressure

We observe (Figure 2) that during recessions, except for the 2001 dot-com bust and the 2020 pandemic recession, the price-to-rent ratio declined to between 90 and 100, suggesting that the ratio may be mean-reverting.

Housing price ratios have all risen to historic highs, also suggested by the z-scores2 in Table 1 that those ratios are significantly higher than the long-term average. Moreover, current z-scores are higher than they were before the housing bubble of 2008. Home prices have been outpacing income and rent in the past two years, suggesting that for the price-to-rent ratio to revert, the most likely way is via a decline in housing prices.3 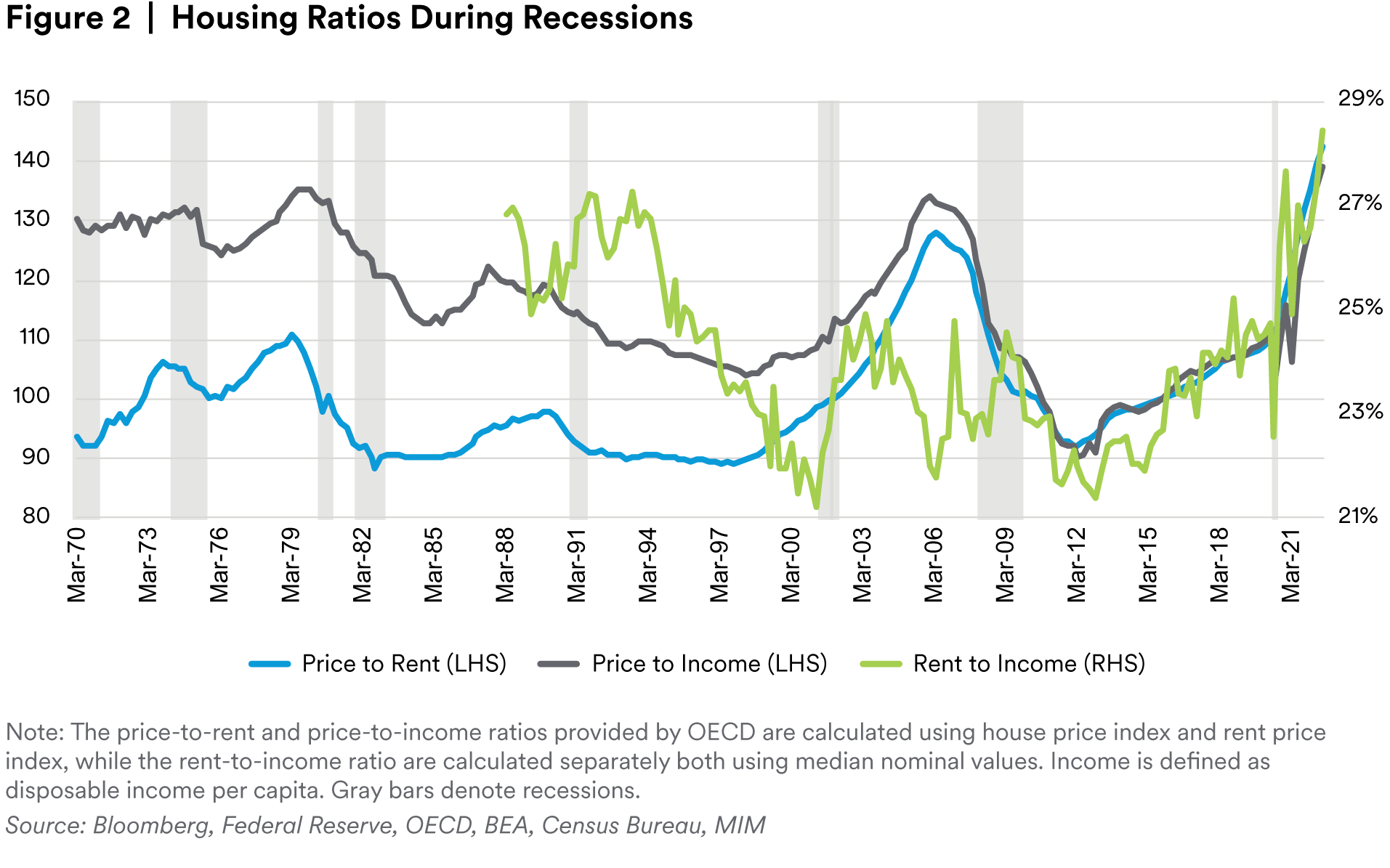 The Tightening Cycle is Likely to Negatively Impact the Housing Market

Analyzing the behavior of the price-to-rent ratio, we find that the stronger and/or longer the tightening cycle, the more negative the impact on housing prices (Figure 3). Given that the rent-to-income ratio is already under pressure (Figure 2), rents may become even less affordable when the labor market starts to feel the impact of a hawkish Fed. 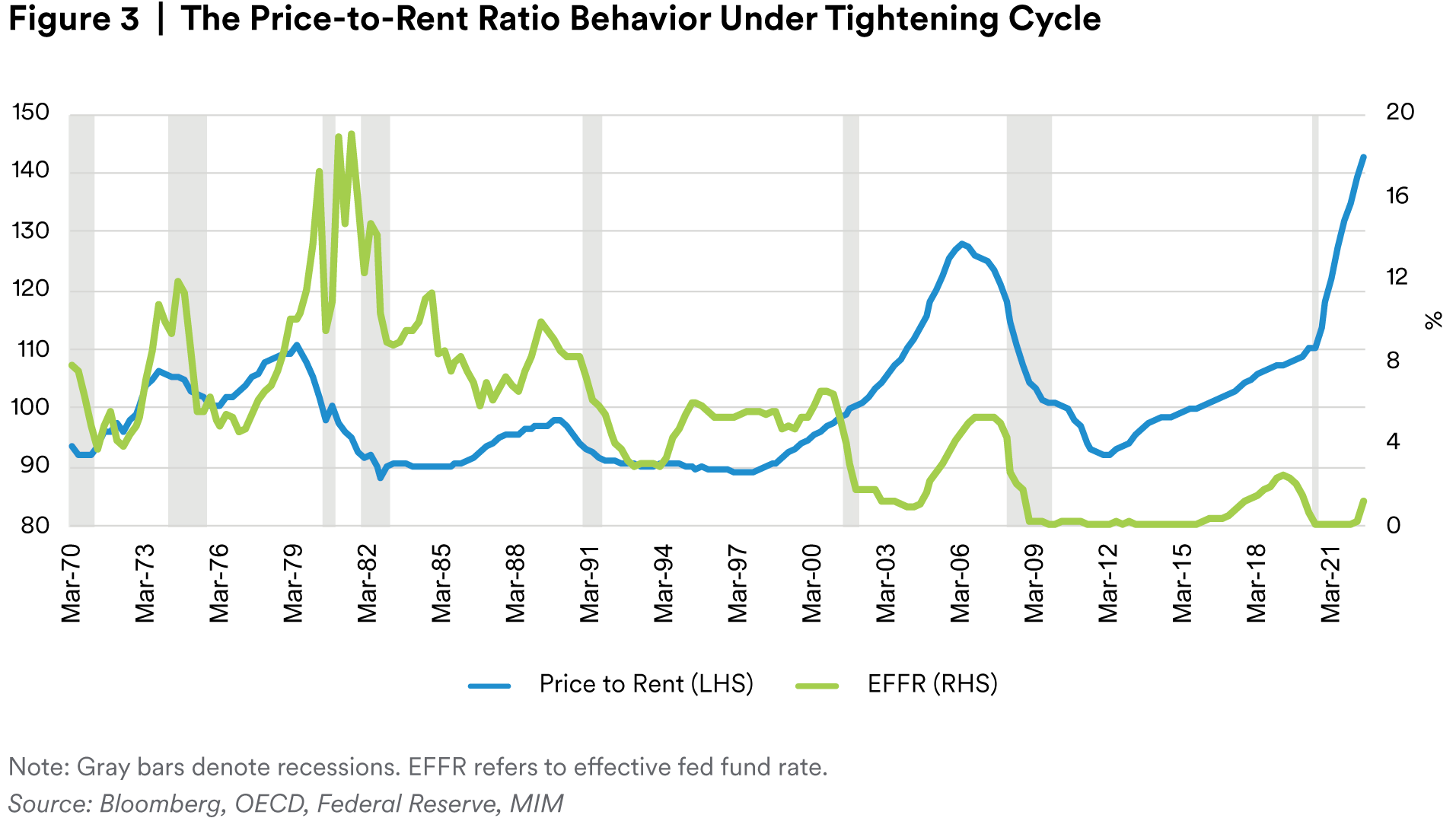 With continued interest rate hikes, lending conditions are likely to become tighter (Figure 4), and many potentials, first-time buyers are unlikely to qualify for a mortgage, further reducing for-sale housing demand. 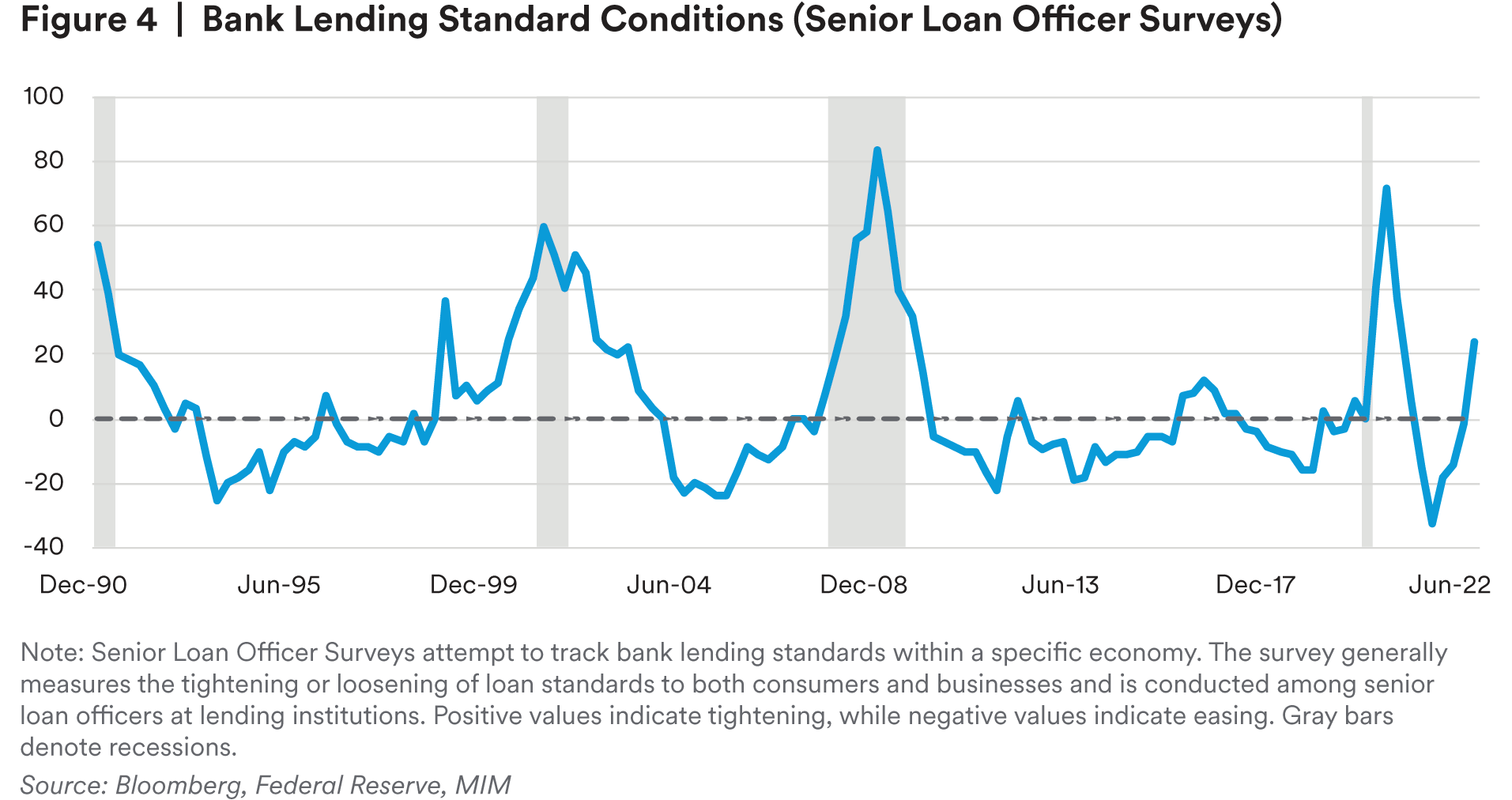 Household Balance Sheets Have Improved Dramatically Since 2008Before the 2008

Before the 2008 housing crisis, household leverage was increasing continuously, with a historically high, household debt-to-disposable-income ratio of 134% and a household debt service ratio of 13% in 2007. Compared with 2008, household leverage is well below the peak of 2007, and the debt service ratio is below its long-term average (Figure 5). These ratios indicate that U.S. households are in a much better position to service their debt today than they were in 2007.

Mortgage delinquencies usually rise with an increasing unemployment rate (71% correlation of delinquencies as % of total mortgage loans to unemployment rate using quarterly data from 1979 to 2022). However, the unemployment and mortgage delinquency rates are both near historical lows. In the short term, based on their relationship, we do not expect to see a drastic jump in mortgage delinquency rates as was seen in 2007. This is due to the historically tight U.S. labor market, which continues to have almost two vacancies for every unemployed worker (Figure 6). This is much higher than the pre-pandemic level and higher than the recent historical norm of about 0.7 vacancies per unemployed worker since 2000.4

Moreover, household assets and net worth, relative to GDP, have increased significantly, compared to their peaks in 2007, while total liabilities continued to decline after the GFC and are at a much lower level than in 2007 (Figure 7).

Even though the Fed is expected to continue hiking interest rates, for-sale housing market may see a less severe price drop than in 2007. Given the tight labor market and robust household balance sheets today, we expect households to weather the storm of the housing market slowdown better than they did in 2007.

Mortgage Debt Credit Quality Is Much Better Today Than in 2007

In addition, the share of adjustable-rate mortgages (ARMs), which were one of the causes of the housing market crash,6 remains relatively small and below the long-term average, coming in at 10% in September 2022, compared to the peak of 37% before the housing market crash in 2007 (Figure 9). In contrast with a fixed-rate mortgage, an ARM is considered riskier. Borrowers with ARMs can become more financially fragile and face larger mortgage payments during tightening cycles that boost mortgage rates. Since both subprime mortgages and ARMs today are playing an insignificant role in the mortgage market, the overall mortgage market has become more stable and secure than was the case in 2007.

The Likelihood of Strategic Default Today is Low

Due to easing lending standards (Figure 4) and high household leverages (Figure 5) before 2008, the U.S. loan-to-value (LTV) ratio continued rising and peaked in June 2009 at 57%. Given the high LTV ratio at that point (Figure 10), strategic defaults7 by individual homeowners were common following the housing bubble bursting in 2007.8 After the COVID-19 pandemic, the U.S. housing market boomed dramatically, so someone who had purchased a house a year or more ago has likely seen a substantial increase in their equity. Today, the LTV ratio at 27% is close to its historical low and below the long-term average, suggesting that most mortgage borrowers would still have positive equity in their properties even if the housing market saw a significant correction. The value of home equity in the system paints a similar picture (Figure 11). Borrowers had consistently cashed out their homes right before the GFC, but that has not been the case in the current time period. With a lower LTV ratio and a lower leverage ratio, servicers see more value in working with stressed borrowers rather than moving to foreclose quickly as was the case in 2007. As a result, the likelihood of strategic default is lower today than in 2007.

Housing Has Been Underbuilt for Years

Housing inventory has been low for many years. Compared to peak inventories of 3.74 million in 2008, the most recent estimate barely came in at 1.1 million, much lower than the long-term average of 2.3 million (Figure 12). In the current U.S. housing market, the main factors behind a lack of building include a lack of building materials, labor shortages, and a lack of entitled land. The process of land entitlement usually is considered complicated, costly, and lengthy and can take anywhere from three to 12 months (at a minimum). Unlike the 2008 housing market, when overall supply grew excessively, today’s housing market is following a period of underbuilding and therefore may see a less severe supply/demand mismatch issue than in 2008.

We believe that the U.S. housing market has passed its peak for this cycle due to rising interest rates, weakening demand, and tighter lending conditions. We thus expect to see a continued slowdown of price growth. However, we don’t believe the housing market today or in the near future will repeat the 2008 housing market crash. Household balance sheets are better, the overall credit quality of the mortgage loans in the market is better, strategic defaults are less likely, and housing has been underbuilt. Taking the factors mentioned above and our forecast of monetary policy into account,9 we anticipate the year-over-year growth of national home prices to slow to a positive single-digit rate at year-end 2022, turn negative in 1H23, and see a negative single-digit rate at year-end 2023. We remain optimistic about the housing market over the longer term.

Endnotes
1 FOMC Press Conference September 21, 2022.
2 Z-score is a metrics used to show how high or low the value relative to the average value using standard deviation as a unit. One z-score indicates that the current value is one standard deviation higher than the average value.
3 For example, to make the price-to-rent ratio lower, either price goes down or rent goes up. But the rent-to-income ratio is already under pressure. To make the price-to-income ratio lower, either price goes down or income goes up, but the tightening cycle is more like pulling down rather than pushing up income or GDP.
4 David Andolfatto and Serdar Birinci, “Is the Labor Market as Tight as It Seems?” Federal Reserve Bank of St. Louis, June 21, 2022.
5 According to FRBNY CCP/Equifax, credit scores below 620 are considered subprime. https://www.federalreserve.gov/econres/notes/feds-notes/the-role-of-credit-score-transitions-20190625.html
6 Colin McArthur and Sarah Edelman, “The 2008 Housing Crisis,” Center for American Progress, April 13, 2017.
7 A strategic default is a decision made by a borrower to stop repaying a mortgage. The decision is typically made when the price of a property has fallen below the amount due on the mortgage. Instead of waiting for conditions to change, the mortgage holder walks away from the property and the debt.
8 Julapa Jagtiani and William Lang, “Strategic Default on First and Second Lien Mortgages During the Financial Crisis,” Federal Reserve Bank of Philadelphia, December 9, 2010.
9 We continue to expect Fed Funds rate cuts in 2023, despite markets lowering their rate cuts expectations. We believe it relatively unlikely that the Fed will be able to maintain high rates for a long time. Moreover, the higher they hike over the next few quarters, the more likely they will have to cut moving forward in 2023.

A Cutting History: 2023 in Context