A growing population, intensifying natural disasters and changing weather patterns are driving capital into this once overlooked sector.

“The growing population along with climate change disrupting weather patterns, creating a bit of unpredictability and risks of water availability and contamination, is driving demand for more clean water. We’re anticipating a continued need to invest in infrastructure and water infrastructure,” says Mansi Patel, head of U.S. infrastructure and project finance at MetLife Investment Management (MIM).

The cost of fixing and upgrading these facilities is great, but the consequences of ignoring them are even greater. Service disruptions and flooding cost U.S. households an estimated $2 billion in 2019.3

Because of the poor condition of water infrastructure, state and local governments are starting to allocate significant resources for the repair and maintenance of water pipelines. Some U.S. water pipes date back to the 19th century, while even ones laid after World War II are near the end of their lifespan of 75 to 100 years.4 Old pipes leak, and water systems currently lose an average of 6 billion gallons of water every day.5

There’s also an increased focus on improving water efficiency and reusing water. In drought-ridden California, some municipalities rely more on treated wastewater, with up to 50% to 75% of potable water coming from wastewater treatment plants, says Syed Ahmed, director of infrastructure and project finance at MIM. 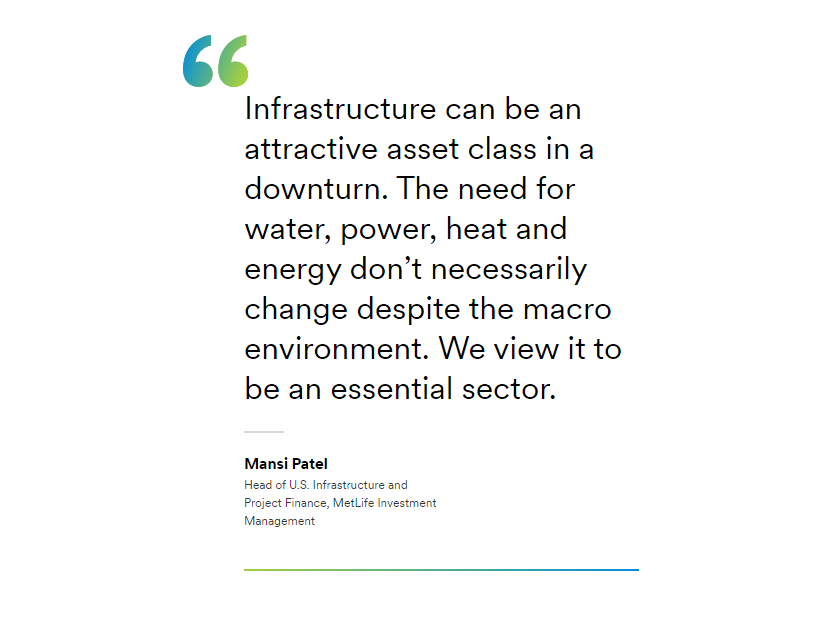 Another urgent effort within water infrastructure is improving the resiliency of existing equipment to withstand increasingly drastic weather patterns. Ahmed sees many such projects on the horizon, “given the amount of flooding that we’re starting to see with all these one-in-a-thousand-year floods.”

Last year, MIM became the sole lender for $197.8 million in financing to support a project in the cities of Fargo, North Dakota, and Moorhead, Minnesota, where there have been multiple so-called thousand-year floods in the last two decades, causing billions in damage. North Dakota has the second-highest inland flood risk in the U.S., after Louisiana. The area was home to 7 of the 10 largest U.S. floods in the last 25 years.

Affected states and municipalities developed a plan to divert floodwater by building a 30-mile channel, an embankment and other protection measures, including levees, floodwalls and stormwater lift stations. To finance the project, MIM led a private placement that included institutional investors along with other sources of financing.

Sizing up the opportunities

Far from a short-term need, water infrastructure requires billions in investment over decades. It can also be an attractive investment option, even during downturns.

Infrastructure debt is generally viewed as stable, with long-term, higher-quality stable cash flows and lower default rates. “Infrastructure can be an attractive asset class in a downturn. The need for water, power, heat and energy don’t necessarily change despite the macro environment. We view it to be an essential sector,” Patel says, adding that water infrastructure specifically “is an attractive portfolio diversifier.”

One change that’s creating more investment opportunities in infrastructure is the increased adoption of public-private partnerships, in which the private sector is involved in the construction and/or operation of an asset. One example is a private developer that designs and builds an infrastructure asset in exchange for a portion of the revenue. These public-private partnerships, or P3 projects, are most often seen in education, transportation and social infrastructure assets.

Between the urgent need and ramped-up attention, investment in U.S. water infrastructure has a positive long-term outlook. “We think water investments will continue to support the need for long-term sustainability goals and allow growing populations access to clean and reliable water,” Patel says.

Disclaimer
This article has been sponsored by and prepared in conjunction with MetLife Investment Management (“MIM”) solely for informational purposes and does not constitute a recommendation regarding any investments or the provision of any investment advice, or constitute or form part of any advertisement of, offer for sale or subscription of, solicitation or invitation of any offer or recommendation to purchase or subscribe for any investments or investment advisory services. The views expressed herein do not necessarily reflect, nor are they necessarily consistent with, the views held by, or the forecasts utilized by, the entities within the MetLife enterprise that provide insurance products, annuities and employee benefit programs. Subsequent developments may materially affect the information contained in this article. Affiliates of MIM may perform services for, solicit business from, hold long or short positions in, or otherwise be interested in the investments (including derivatives) of any company mentioned herein. This article may contain forward-looking statements, as well as predictions, projections and forecasts of the economy or economic trends of the markets, which are not necessarily indicative of the future. Any or all forward-looking statements may turn out to be wrong. All investments involve risks including the potential for loss of principal.
Past performance is not indicative of future results. No representation is being made that any investment will or is likely to achieve profits or losses or that significant losses will be avoided. International investing involves risks, including risks related to foreign currency, limited liquidity, less government regulation, and the possibility of substantial volatility due to adverse political, economic or other developments. These risks are often heightened for investments in emerging/developing markets or smaller capital markets.
MIM is MetLife, Inc.’s (“MetLife”) institutional management business and the marketing name for subsidiaries of MetLife that provide investment management services to MetLife’s general account, separate accounts and/or unaffiliated/third party investors, including: Metropolitan Life Insurance Company, MetLife Investment Management, LLC, MetLife Investment Management Limited, MetLife Investments Limited, MetLife Investments Asia Limited, MetLife Latin America Asesorias e Inversiones Limitada, MetLife Asset Management Corp. (Japan), and MIM I LLC.